We have lived in the middle of the woods for 28 years and have never had a bat inside our house. But, since going on the road, we have had one in our motorhome! We were staying just outside Duluth, MN at a wooded campground. One night just after hitting the sack, I felt a slight breeze on my face. We had a window cracked, but it didn’t feel like it came from that direction. Then I felt it again...By that time my eyes had somewhat adjusted to the dark, and I barely made out something flying around. I yelled out, “There’s a bird in here!!!” We both jumped up while turning the light on and saw that it was a bat! We quickly ran out, shutting the bedroom door behind us and hoping to keep it in there until we could figure out what to do. Dale went outside to get the bug zapper racket. When we opened the bedroom door, there was no sign of the bat. There’s a 2 inch gap under the door, but we thought for sure we would have seen it, had it flown out. Dale thought it probably went back out however it came in, although we had no idea how it came in. We searched for it over an hour, then Dale said he was going back to bed. I was sure it was somewhere inside, so I laid down on the sofa peeking thru the holes of an afghan with all of the lights on waiting for it to fly by again. With no sight of it for the next few hours, I finally dozed off just before daylight. 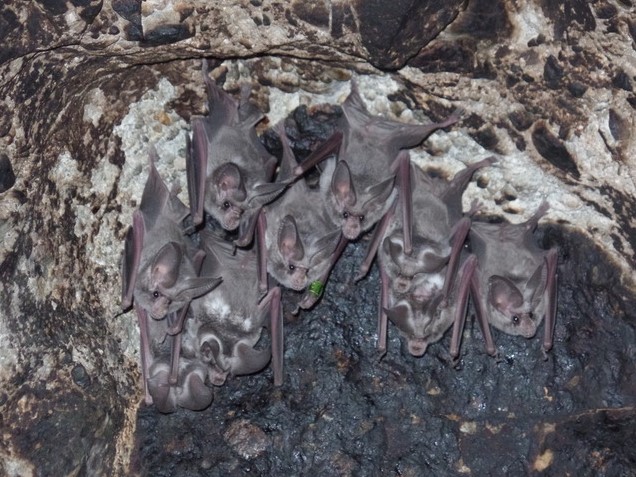 The next day was a normal day, and we still had no more sightings of the bat so we assumed it had surely escaped the way it came in. However, that night as soon as we turned the last light off and laid down, the darn thing flew right over our bed again! In a heartbeat, it flew out into our living area so we shut the bedroom door again to try and keep it contained in one area. It was flying back and forth so fast we could barely keep our eyes on it. I was screaming and jumping trying to dodge it and Dale was laughing his head off, trying to chase it down with the racket until he realized that wasn’t going to work. They definitely have good sonar because it was not flying into anything. We then got the idea to open the outside door in hopes it would find it’s way out, and it soon did. After being inside for close to 24 hours I thought for sure we would find bat droppings somewhere, but we couldn’t find any surprisingly!

To this day we don’t know how it got in. We never leave our door open without the screen door shut, and they can't get through the windows either. After the fact, while researching how to get a bat out of your house, we did read it’s not that uncommon for them to come in on your clothing, especially jackets. We learned there are several ways to get rid of a bat, if it’s flying around. The best way is exactly what we ended up doing…opening as many doors and windows as possible while being quiet and calm (which I wasn’t). We also learned you can trap a bat inside a sheet then take it outside to be released. Another method is to put some water in a bucket (bats are drawn to water). When it flies into the bucket, it cannot fly up from the water. Then you take the bucket outside and dump it, freeing the bat to fly away. If this ever happens to us again and it doesn’t fly out on its own that’s what we plan to try.

Of course, we do not have a picture of our bat experience, but I’m including a picture we took at Yuma Territorial Prison. The tour guide took us into the infamous “Dark Cell.” Obviously, It was pitch dark when he mentioned there were lots of bats in there. I headed straight for the door! Dale took some pictures with the flash and this is what we later saw. They were clumped together everywhere! Let’s hope you never get a bat in your RV or house, but if it happens, hopefully you will know how to get it out at first sight.
- Dale & Debbie